The Lost Carousel of Provence 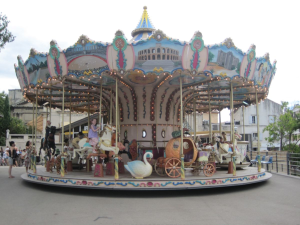 Just take a look at this cover! It is so alive I can almost smell the lavender.  You know I’m a sucker for anything French. And I’m a fan of Juliet Blackwell. Win/win.

It’s 1901, Provence, France. We briefly visit Château Clement where the excitement is palpable as the finishing touches are added to the newly built carousel that will grace the property.  The cats, dogs, pigs, and rabbits were carved, painted, and gilded in Bayol’s factory in Angers, but it has taken nine men to transport the pieces by rail, then by steam traction from the station to the château, and then to assemble the machine on site.  Yves Clement and his lovely much younger wife Josephine are beside themselves with joy. You see, they’re hoping for a household filled with the joyous voices of children. It hasn’t happened yet, but……

Who is Monsieur Bayol? He’s a famous French carousel carver: Gustave Bayol.  Until now, Bayol has always only employed men. Until now. This time a young woman carver has accompanied the men…. Could there be trouble?

Forward to present day, Oakland, California. Meet Cady Drake.  Cady has a very troubled past. But it’s the future that counts now. And she’s off to France  after being offered a contract to produce a photo book of Parisian carousels.  Cady has a special interest in carousels as she has an old carousel rabbit she’s named Gus and cherishes it.  Lately, it’s literally fallen apart and within it is a piece of history and a secret that is a pandora’s box in itself.

LETTERS FROM PARIS and THE PARIS KEY are two novels set in France and written by Juliet Blackwell. I loved them both.  Blackwell knows how to set the tone, whisper in your ear in the language of France, and bring you the sights and sounds of the region.  She does not disappoint with THE LOST CAROUSEL OF PROVENCE.

The research Blackwell has done is superb. I  found myself happily ensconced in the world of carousels while reading this novel. It brought to mind a special carousel that I visited with my children on the Island off the coast ofToronto. 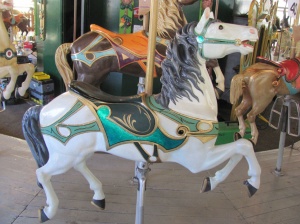 This amazing carousel was lit up and we could hear its merry sounds across the water as we approached the island by ferry. Happy times.

THE LOST CAROUSEL OF PROVENCE is filled with secrets and family angst. It’s filled with good food and spirits.  But, mostly, it’s filled with a sparkling story and will sweep you away for a time to the French countryside. What could be better than that?

Cady’s adventure in and of the Château Clement will keep you enthralled. Her interaction with the old man who still lives in the château will give you pause. Who is this man?

Of course there is romance. But what I love is there is not too much romance. This book  has just the right amount of everything. And I love the reader’s guide at the end. Great for those of you with bookclubs.

I have one lovely copy of THE LOST CAROUSEL OF PROVENCE by Juliet Blackwell for giveaway. I am thrilled to be able to offer such an amazing book. Please leave a comment below and I will pick one winner on Monday, September 17. Only U.S. addresses, and no P.O. addresses, as per usual. Your gorgeous book will arrive from Berkley, a division of PenguinRandomHouse.  Many thanks go out to them for this!!

Good luck to all!

17 thoughts on “Giveaway! The Lost Carousel of Provence by Juliet Blackwell”