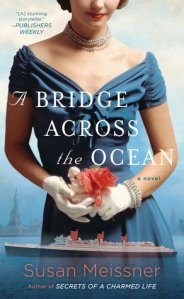 A Bridge Across the Ocean

“A Bridge Across the Ocean,” by Susan Meissner, is told from the alternating perspectives of Annaliese Lange, Simone Deveraux, and Brette Calake.

In the aftermath of WWII, Annaliese and Simone join hundreds of other European war brides aboard the Queen Mary. Both have suffered greatly during the war: Annaliese is a German desperate to escape her abusive Nazi husband, and Simone is the only surviving child of a French Resistance spy. Their stories converge when they meet in line to board the ship. Both are desperate to leave the war behind and start over. As the women sail toward their new lives in America, tightly-held secrets are revealed in their shared cabin.

When the ship docks in New York Harbor, only one of them will live out her American dream.

In present day, facing a crossroads in her own life and coming to terms with her family’s dark legacy, Brette visits the rumored-to-be-haunted Queen Mary. What she finds will lead her on a search to solve a decades-old mystery connected to Annaliese and Simone’s fateful crossing.

Susan Meissner met and interviewed June Allen–now 86 and living in Indianapolis. June was one of the war brides who made the trans-Atlantic journey on the Queen Mary in February 1946. She was eighteen when she boarded the ship with her baby boy. They were bound to American to be reunited with June’s U.S. Army MP husband, Arnie. June spoke of spending the 5-day crossing watching movies and playing shuffleboard with the other war brides. The ship even printed a newspaper called Wives Aweigh.

The women in the book are fiction.  But Meissner did her research on the voyage and the ship. She spent a night at the Queen Mary hotel in Long Beach, California; where the ship is now docked. That’s where she fell in love with the ship and its complicated history. It’s even noted that the ship is haunted with ghosts of past lives. Hence, the part of the story dealing with ghosts.

Shifting back and forth in time, Meissner manages to keep you flipping the pages long into the night as you imagine what is happening next.  Both women on the ship have suffered, each in totally different ways.  They each have secrets which they reveal to each other when they share a cabin.

The cover of the book is gorgeous. The subject is compelling. Don’t let the ghost story deter you. I am not a fan of ghost stories but, I enjoyed this book. It’s much more than that.

My trade paperback copy came from Berkley publishing house, a division of Penguin Random House.  I really liked the book. Thanks so much for sending.

One thought on “A Bridge Across The Ocean by Susan Meissner”

My Life in Tuscany