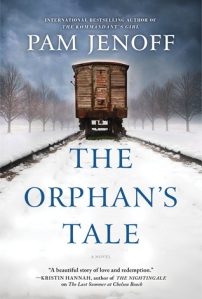 Just when I thought I knew almost every atrocity involving The Holocaust, along comes Pam Jenoff with a new harrowing account filled with true stuff I knew nothing about.  It’s a novel, but with lots of true stuff.

“The Orphan’s Tale” is a novel like  “The Nightingale” or “Water for Elephants.” The characters are fictional, but the stories come from events that actually occurred.  I will tell you right now that the hair on my arms stood straight up several times while reading this amazing novel.

The story is told in the voices of two young German women. Noa is sixteen and has been thrown out of her own home by her father when he discovers she’s become pregnant by a Nazi.  She is forced to give the baby up.  When she discovers  a boxcar filled with Jewish infants bound for a concentration camp, she can’t help but think of her own child. And then she does the thing that changes her life forever…

Astrid was married to a German officer. When he was told to divorce her because she was a Jew, he did just that, and he tossed her aside. So much for true love. Astrid’s family was a circus family. When she could not locate any of them she was taken in by another circus who protected her Jewishness. As best they could.

The circus. Who thinks about a circus during war? I never did. What happens to the performers, the animals, and the shows? They all come under the boots of the Gestapo.

Circus life is one I know very little about. Just what I’ve read over the  years in great books like “Water for Elephants” and “The Night Circus.”  The scenes where Astrid is teaching Noa how to “fly” through the air on the trapeze are mesmerizing.  And downright scary.  Accidents do happen.

Astrid and Noa are harboring secrets. And secrets can eventually kill. Especially during wartime.  The friendship that blooms between the two women becomes threatened.  The secrets fester and burn.

This is Pam Jenoff’s best novel.

She has taken a tall step up with “The Orpan’s Tale.” Jenoff says this was the most difficult book she’s written. She was experiencing personal stuff while writing it. Well, it’s amazing. Keep up the great work.

My review copy arrived from Mira publishing in exchange for an honest review. I think it’s just super!

2 thoughts on “The Orphan’s Tale by Pam Jenoff”